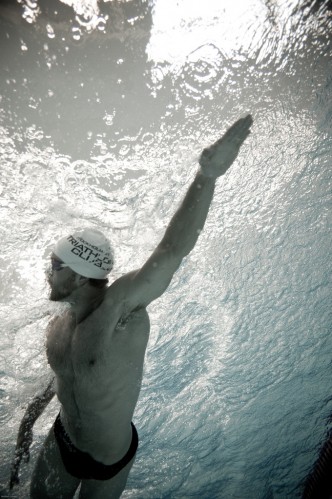 I’ve already published a few photos from my sessions at the national swim arena Eriksdalsbadet in Stockholm, where Marcus trains together with his triathlon club, but I’ve never shown you the ones that were taken under the surface. So here we go, let’s jump in, get wet and see how it looks like when you kick some water.

When swimming it doesn’t matter how strong you are or how big muscles you have, it’s all about the technique. Marcus might have fine tuned muscles but that’s not why he can crawl faster than you. He might not live in the water as much as an elite swimmer, but he has still spent so many hours in it that I would classify him as a fish. It’s time consuming and to be honest, you don’t gain that much in time compared to someone that is slightly slower, but when doing competitions on the Ironman distances you can’t afford to loose any minutes.

I have spent several hours in swimming pools too, but I’ve never actually been thinking of how you look like when lying there throwing your arms and legs in a desperate attempt to get to the other edge faster than the one behind you. So it was with a huge interested eye that I dipped my camera in the water to have a look on how the life as a triathlete is, under the surface. I found it hard to capture the actual motion, but I still think that the power is quite obvious in some of the shots. Enjoy! 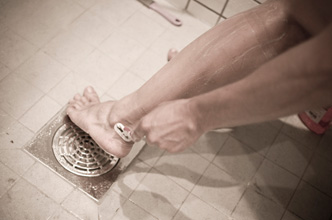 Marcus Hultgren’s goal for the triathlon season of 2009 was to be among the fastest top ten Swedish males on the Ironman distance at Kalmar Triathlon 2009. A tough mission that would force him to cross the finish line after an estimated 9 hours. I’ve been following Marcus for the last months so this was not only his big weekend, but also mine, since this embarked the peak of my photo project.

First of all: Marcus ended up on 14th place (among Swedish triathletes in the same age group) with a finish time of 9.30:24. I could’ve forced you to read the entire text before telling you the result, but now I’ve spoiled it all so let’s just get along and focus on the interesting part.

I know many of you readers, including myself, have no idea what an Ironman means and especially not Marcus’ goal. So let’s put it all into perspective: no more than about 20 Swedish males have ever done an Ironman under 9 hours (according to ironmanstatistik.se). So if you already thought that swimming 3.8 km, cycling 180 km and running 42.2 km was hard enough you now understand that doing this on 9 hours is bad-ass tough.

You might think that 14th place is a huge loss when your goal was to be among the first ten. Well, if you just read the numbers it’s hard to argue against; 14 instead of 10 is a miscalculation with 40 %. And the time this year was only 2 minutes better than last year (finish time 2008: 9.32:46). Marcus had about 200 more training hours before this years Kalmar Triathlon, compared to last year, and a more dedicated schedule overall – how come the results were not any better? 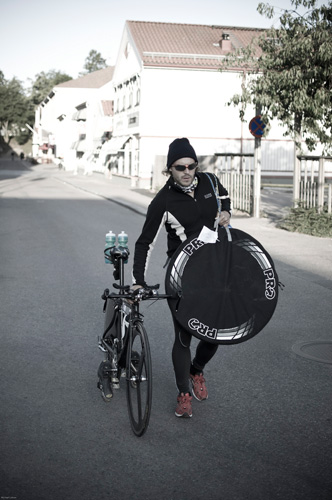 The answer is both simple and complex, but to summarize it all in one word it would be: human. Yes it’s just as simple as that. You train forever and ever and put all your energy and focus on one single race and when the day comes and you stand there facing your biggest challenge it’s all up to your mind and body and nothing else. You can’t do anything else than just push yourself as hard as you can (and a bit longer, harder, faster) and hope it’s enough. If you have a really good day you’ll crack all your expectations and if you have a plain good day you’ll run in on a time that would fill most triathletes envy. The line between these days is very thin and the side you land on is most often up to your own mind. Motivation is a key factor to success on elite level and even though Marcus wasn’t fighting for the podium he still needs a mind as hard as his muscles.

Of course I got disappointed when I during the race realized that I wasn’t able to reach my goal. I really gave 100 % the whole time and I was simply not able to push it any harder. It feels strange when you know you have it in you but it’s impossible to bring it out. The only thing I can feel pleased with is that I gave it all.

Training is of course the most important thing, no doubt, but I guess that is something everyone understands. Was there maybe something in Marcus’ training that could have been better planned?

I had this mad ’boost week’ exactly one month before Kalmar Triathlon and I don’t say that it wasn’t smart to push my body for 40 hours during that week, but if I’m doing it again next year I’m scheduling it one week earlier. The ”rest period” between the boost week and the actual race should also have included some quality training with higher speed.

But let’s get back to the actual race which took place on August 1st 2009. The preparations for this specific day had been going on for weeks and even months and as the sun started to rise over Kalmar it all went very smoothly and quickly. Breakfast, pumping the tires with a correct amount of air and then grabbing the already packed IKEA plastic bag in one arm and the bike in the other. It wasn’t much talking the first hour, but I guess that was a combination of time (we got up at 4.30 am) and a lot of things spinning around in everyones mind. In one way the race had already begun, even though it was two hours until the hoot would mark the start. 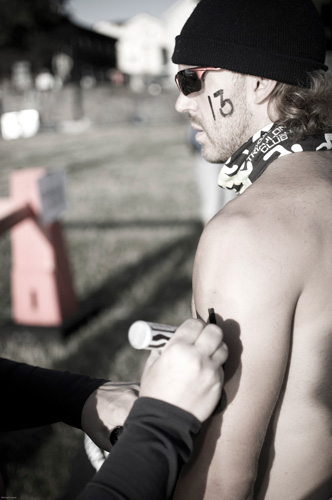 The social part of Marcus woke when we got the transition area. Talking to all friends and competitors at the same time as he prepared his spot seemed like something he had done his entire life. The clock quickly ticked down to race start and I guess I was more concerned about the time on the watch then Marcus, he seemed utterly cool and calm. And why would he be nervous? This was just another competition and it was just to go on routine. Myself, I had thousands of things to think about: where to stand during the transitions, where not to stand, did I have all my memory cards for the camera with me, did I remember to empty them, which lens to use when, how to spot Marcus in the water when they all wear the same head caps? I could go on forever, but I guess you understand my situation. Even though I had followed Marcus on several triathlon races during the past weeks I still felt a bit uneasy about the whole situation. There were simply not any room for failure.

As a whole I was very pleased with the day. The swim start happened so fast I almost missed it, but the low placed sun was perfect for some epic photos of the triathletes as they swam out into the open water. Transition 1 (from swim to bike) was over in a blink and I really had to use my legs to keep up with Marcus as he ran towards his transition spot. Each leg of the cycle course was 60 km, which mean the athletes rode it three times making it perfect with at least two photo opportunities. And if T1 was over in a blink T2 was even faster, which made it hard to get any good photos of Marcus as he parked his bike and put on his running shoes. The marathon course was also divided in three parts and it was a ”pleasure” to see them all get more tired for every lap. Yes of course I wanted them all to be tired, that is what makes a good photo.

So what happens now Marcus? Is the season over for this year? An Ironman next year too? What about a trip to Kona, Hawaii?

I’ve now had a month of recovery but the training for season 2010 actually just started. Being a triathlete means more than just one single race for me, it’s a lifestyle. Doing an Ironman is not as important as everything else around it, but yes I would definitely not say no to a slot for the ’real’ Ironman on Hawaii. My plan right now is to have a middle season next year where the main focus is to have fun and then during 2011 go to Frankfurt to compete for a Hawaii slot the same autumn.

Marcus’ performance was really outstanding and it was a true pleasure to be a part of his journey from the start at 7 a.m. until the last steps over the finish line 9.30 hours later. With all photos in front of me it’s hard to pick out just a few so I hope all of you will enjoy this bombastic slideshow.

But do not think that this project is over only because Marcus season of 2009 is. I still have a few photos to show you and I’m in full planning of an exhibition in the near future. Stay tuned for some more sweaty and powerful photos.

This is an ironman

Kalmar Triathlon 2009 is over. It was a tough race; windy and hot. Many great athletes ran right into the unmerciful wall. Marcus crossed the finish as number 14 in his age group.

My camera managed to fire around 3 000 rounds and I guess I wont have to tell you that a few hours will be spent just to go through them all. Instead of letting you wait I give you two teasers. The rest of the photos, together with a summary of the race, will be posted hopefully sooner than later.

Below you can see a happy ironman crossing the finish line. ”I felt quite clear in my head, but as soon as I crossed that line my mind told me to find a place to lie down”, Marcus told me afterwards. After about three minutes he was up on his feet again with a smile on his face. 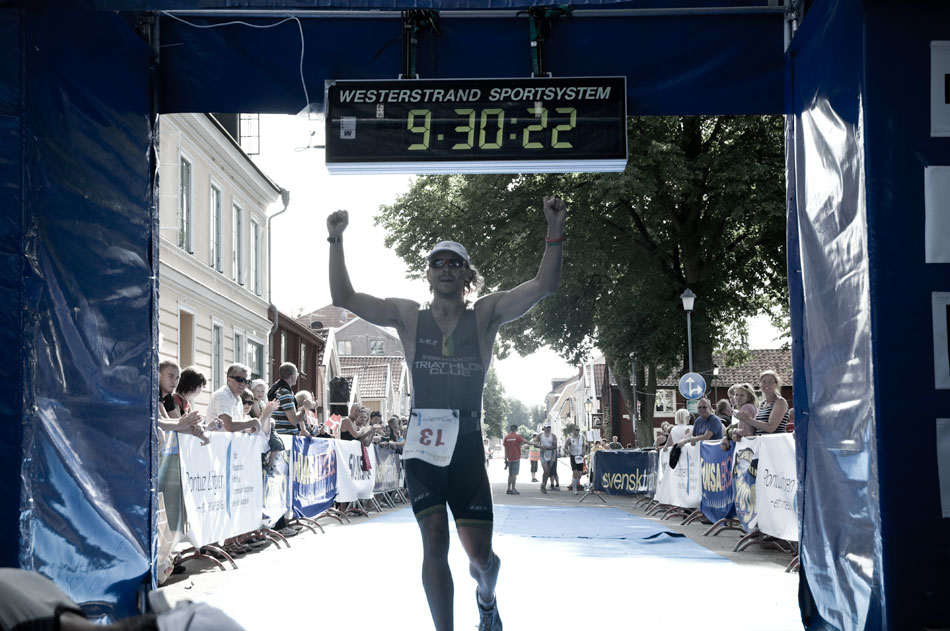 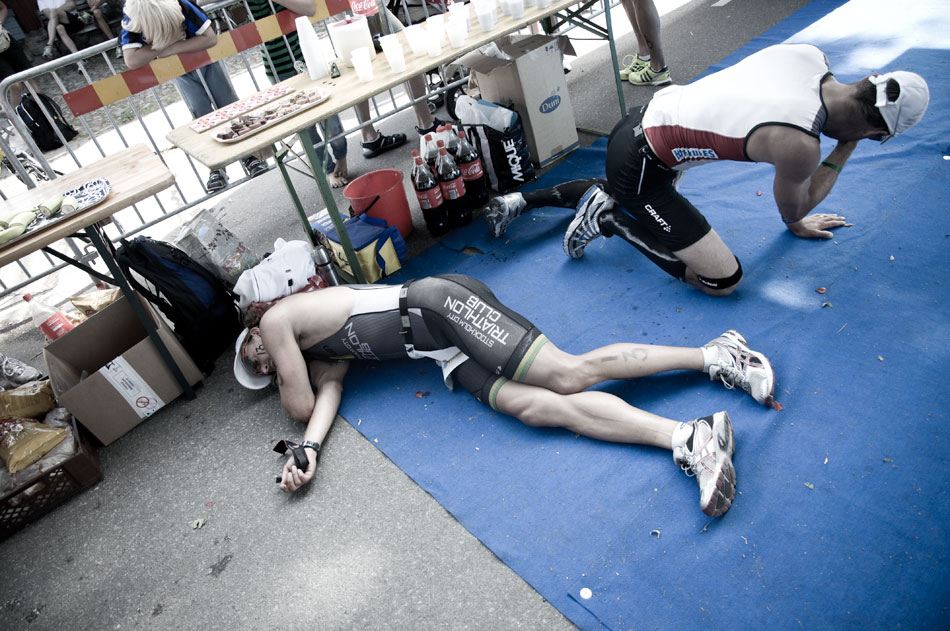