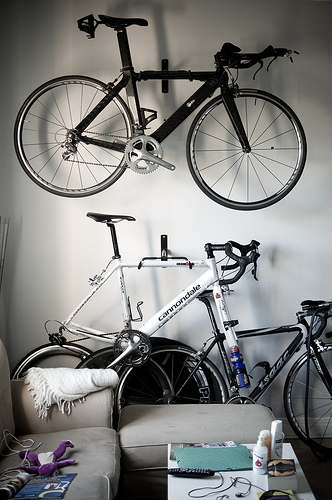 It’s Friday afternoon and it’s hot outside, I would guess around 26-27 degrees. The Swedish summer has hit us with its’ might and the days to come doesn’t seem to let us down either. When most of us would enjoy a summer day like this by the water, eating an ice-cream, finding a free chair at the nicest bar or at least just be outside, others do the opposite.

Regardless of the situation outside, Marcus has to keep focused and do his thing. Today is bicycle time. Intervals. At home. ”Inside?” you may ask. Yes inside. In fact, the best place for his bike is in the kitchen. Sweat will drip down on the plastic floor instead of the wooden dito in the living room and the view from the kitchen is also a little more teasing since he can see the world outside. Today it’s hot, but it could of course also be the opposite. Just imagine the view 6 months ago when he was fighting the pain while seeing falling snow. But when he sits there, pushing and pulling the pedals at 100 rpm, does he really care about the weather? I’m not so sure… His head may be pointing towards the window and the green trees outside, but his vision is definitely somewhere else.

But why the heck train inside during summer when you can be outside feeling the warm wind against your newly shaved legs? Marcus explains and even though I wouldn’t do it myself I undersand how his mind works.

I use my trainer all year around. Most people move it away as soon as the snow is gone, but for me it’s so much easier to do my intervals right here in my kitchen. I don’t have to care about what I wear, or ride my bike to a decent road where I can push the limits. There’s also no red lights, cars or other disturbances that may take away my focus. Doing my 40 minute intervals here at home feels so much ’easier’ and then I also have time over for something else when I’m done.

The intervals he does are based on his pulse. He pushes himself real hard for four minutes and when the time is up he stops pedaling to enter a four minute rest period, where he waits for the pulse to go down to 100 bpm. When the pulse is low enough he starts pedaling in normal pace and when the rest is over he starts all over again. This whole procedure is done 4 times and even though you usually never get real high pulse peaks during cycling (as you do when running) you get the same effect: fill your muscles with lactic and train your body to push it away as fast as possible.

After about 45 minutes Marcus hops off his bike and starts the stove at the same time. When the bike has been stored away (by hanging it up on the wall) he goes back to the kitchen to spend even more time there, but this time to do dinner. He opens the refrigerator and asks me if I want a cold beer. If I want a beer? How could I not want one? I mean, it’s hot outside but even hotter inside.

I guess this is where the line between an athlete and elite is drawn. 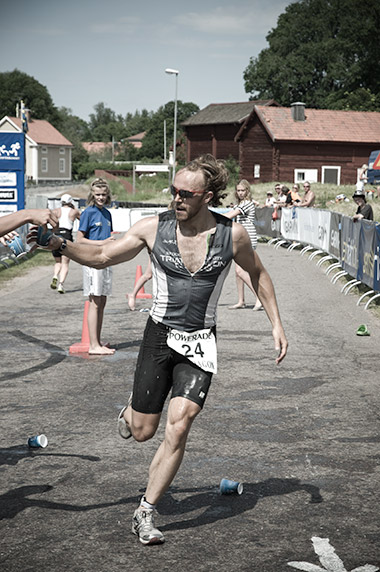 The event of the year (”Järnmannen”) is just 32 days away. Marcus has been training for this specific day for a long, long time. But this week is a bit special compared to a normal one. He will be training all the separate events (swimming, cycling and running), just as he does every week, but just a little bit more.

Try to visualize the words ”boost week”. Did you see anything? Maybe not? Okey, I’ll give you a hint: if you would go to work for 8 hours for a whole week you would end up with around 40 hours. And that’s exactly how much training a ”boost week” is about – between 40 and 50 hours.

A ”boost week” is done to wake the body up and give it a damn good push to what it’s expected to deliver one month later. This much training is of course extremely rough and your body will be almost knocked down by the intensity. The challenge is to keep yourself on the right side of the line, not pushing it too much. When the week is over, so is your body. This is when the magic happens – your body will start to heal and also try yo compensate so the next time this happens it will be better prepared. And it will happen again, in about four weeks.

Why this madness you might ask yourself. The answer is in fact quite simple: Marcus has a goal and to reach it he has to be more dedicated and well prepared than his competitors.

Sunday
» This is when the recovery phase starts…

If you would ask a random person to explain triathlon they would most likely say something like ”Ironman, yeah I’ve heard about it” or ”people doing that dedicate their whole life”. Well, it’s true that Ironman is a part of the triathlon concept, but not all triathletes will ever do a full length Ironman or even dedicate their whole life to the sport. But let’s take it from the beginning.

The history
Triathlon was first heard of in France in the 1920’s where some competitions involving swimming, bicycling and running took place (but not necessary in that specific order). The modern version of triathlon started in San Diego (California) in 1974 and has expanded as a recognized sport throughout the world ever since. Triathlon is since 2000 on the Olympic program and the distance is called, not totally surprisingly, Olympic distance. The first Swedish triathlon event was held in Uppsala in 1983.

The Ironman
Ironman was first organized in 1978 on Hawaii after a long-run debate between runners and swimmers about what athlete that were more fit. After reading an article that said that a Belgian cyclist had the highest ever recorded maximum oxygen uptake ever registered amongst any athlete, they decided to organize an event so they would get an answer to their biggest question. A combination of Waikiki Roughwater Swim (3 800 meters), Oahu Around the Island Bike Race (180 km) and Honolulu Marathon (42 km) created the foundation of the first ever Ironman. The 15 people that started got a short note from Commander John Collins, one of the organizers:

And to tie it all together Collins also was believed to had said:

Whoever finishes first, we’ll call him the Ironman.

The true Ironman competition is held on Hawaii ever autumn and to be amongst the ”lucky” athletes you need to get a ticket by competing in a selected race around the world. These races have a certain number of slots (for Hawaii) available, so it’s very important to be among the top winners in your age group to get a ticket. Even though Ironman is a distance it’s also a trademark, which means you can not organize a competition called Ironman without the sanction from the World Triathlon Corporation. In Sweden there’s a triathlon event every year called Järnmannen. This name is a direct translation of Ironman, which comes from the fact that this is not a sanctioned Ironman competition. It is never the less the true adventure for every Swedish triathlete seeking to finish an Ironman distance without the hassle of getting a slot to Hawaii.

The distances
But as I wrote, not all triathletes will ever complete a full length Ironman. The variety of distances makes this sport perfect for all types of people looking for a worthy challenge. The Olympic distance is today one of the most common at triathlon events. It’s done in roughly 120-180 minutes, depending on your capacity and the course, and makes it perfect for both the top elites as well as everyday people looking for a decent challenge. Not all competitions are however the same. Larger triathlon events may have bigger transition areas, making the run from the water to the bike a bit longer than if you would attend a race with fewer athletes. And some bike roads and running tracks may be tougher than other, which means that comparing times from two different races with the same distance a bit hard. But one thing is however certain – if you win, you win.

The most common triathlon distances are:

The rules
I wont write an essay about the entire set of rules (please see the Triathlon article on Wikipedia for more in-depth information) but this is basically how it works:

The time from the beginning of the swim to the end when you pass the finish line after the run is your total time. The person with the lowest time, wins. After the race you usually also get the times for all individual parts, which also includes T1 and T2 but these are often not very important since all triathlon events have their own distance to and from the transition area.

The gadgets
Even though it’s quite easy to begin your triathlon career it can be expensive when you find all the fun gadgets. The most expensive part is the cycling, but getting a cycle for around $500-$700 is often enough to get you started. Then you also need a swimsuit and a pair of running shoes. That’s basically it and you’re ready to enter a competition. When you get more experienced it’s very, very easy to put all your savings into this sport. For example: a complete carbon fitted bicycle with all the latest gadgets and nifties can hook you up on $10,000, easy.

Not just crazy people
Even though some triathletes dedicate their whole life to the sport and everything around it, you shouldn’t be scared away. Triathlon is one of the best sports for an everyday person. Just think of being able to choose what to train – swimming, cycling or running. Your body also gets an all round exercise making it stronger on all parts and more resistant against injuries.