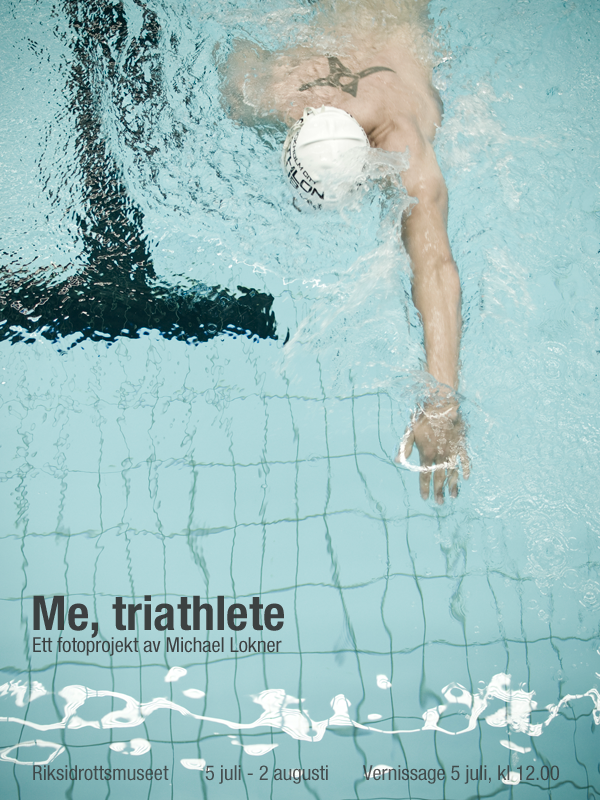 One of the goals with this project is to show a selection of the photos during an exhibition later this year. But as the title of this post says I will have a little mini exhibition already know.

From Sunday July 5th until Sunday August 2nd a small number of the photos will be put up at ”Riksidrottsmuseet” (National sports museum). This is of course a real push in the right direction, but also gives me some fire back there to continue this project and to snap those perfect moments of the triathlete Marcus’ life.

On the of the exhibition there will be an event called ”Triathlondagen” (The triathlon day) just nearby the museum, where newcomers can try out the sport. For those of you interested on how triathlon is done, but don’t want to try out, it’s a perfect chance to get a really good look at one of the best triathletes. Read more about this event at www.triathlondagen.com (only in Swedish).

For a map to ”Riksidrottsmuseet”, click the map below.

Someone once told me that ”all the greatest triathletes were swimmers from the start” and I guess that might be true. To stand out as one of the best triathletes you obviously need to be very talented in all three sports (swimming, cycling and running), but it’s without a question the first triathlon distance that makes all the difference. We all know how to run (yes you do know how to run, even if you’ve never owned any running shoes) and riding your bike is also something that most of learns in an early age. But swimming is sadly enough not as high ranked, even though most of us learns how to keep the head above the water. So if you’re the new Ian Thorpe or Michael Phelps you’ll have a huge advantage against your rivals.

Stockholm City Triathlon (SCT), the club that Marcus trains with, has one 50 meter pool booked 4 times every week. Compare that with running (usually 2 times/week) and cycling (1-2 times/week) and you understand that swimming is really important for every triathlete.

The whole year is very well planned (more about this will come in a later blog post) and this week is all about testing your capacity. The distance is 800 m or 1 500 m all depending on where in the pool you are. The lines to the right (named 3b and 3a) are for beginners and as you get better and faster you progress to the left and perhaps one day you’re along the Phelp-wannabes in 1a.

To be able to use a thought out training plan as a model for your training is really good, of course, but it’s not 100 % sure that it will fit into your own calender. The training is obviously planned to give the maximum out of you during the triathlon competition season, so another ”unplanned” event (such as a running competition) might take too much of your stored energy that was supposed for the test weeks.

Marcus ran a half marathon competition last weekend and still had some loss of energy, together with a lowered morale (because of not reaching his time goal). In situations like these it’s really important to stay focused and keep on looking ahead. It might sound simple, but it’s all in your head. Except for the muscles of course…

I had my camera with me, trying to capture the energy and focus in the pool. It’s a very silent sport, but still not at all.

So where do you start on a project like this? Obviously for me as a photographer it’s all about the photos and since I’ve never used my camera to document an athlete before I had some very cloudy ideas about certain things.

Like bicycling. I mean, how the hell do you take nice documentary photos on an object that usually travels around 35-45 km/h? Do I want motion blur or not? Should I perhaps rig up a lot of flashes to be able to freeze the fast moving two-wheeler? Is it possible to take picture while riding the bike at the same time? How do other people on Flickr do? Or should I just go my own way? Help!

As you can see I had really no idea what so ever on how to take these first photos. But why be scared? This is the most fun part of photography: new challenges!

I met up Marcus around the recreation area Hellas, which is quite close to where I live. When I rode there I found some nice pieces of asphalt and thought that a small climbing hill could be a good start. This would mean that Marcus couldn’t bicycle too fast, since going uphill, and I would also get a better overlook over the scene.

About 100 shots later I decided to go more with motion blur, placing the camera directly from the side of the road, having Marcus bicycle from left to right (or vice versa). I think that these photos really grabbed the moment better, since this part of triathlon is all about speed and optimizing your aerodynamics.

When we headed back towards the city I suddenly stopped and decided to try this really unsafe photo technique: taking photos on Marcus while riding the bike myself. This was actually really fun and even though 80% of the material turned out blurred or out of focus I got a really huge kick out of it! I will definitely try this again. For those interested I have some tips: since you don’t look through the lens while taking pictures, auto-focus is a must, but remember to point towards the object before pushing the button since it’s very easy to end up with out of focus photos…

So, the first photos of this project have been taken. Maybe not a biggest step for mankind but certainly I smiled the whole way home and even more when I realized that the so called ”photo test” ended up with at least 5 photos that I would consider ”good enough”.